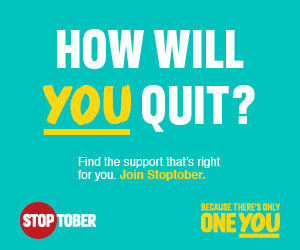 Stoptober 2016, runs every October. Public Health England encourage participants to stop smoking for 28 days, with the goal to giving up entirely. As much as 2.5 million smokers made an attempt to quit in 2015 and 20% (500,000) were successful. The highest recorded success rate and an increase of 13.6% from 6 years ago. The smoking rate in England has also fallen to below 17% for the first time. Stoptober 2016 is back for a fifth year, having driven almost a million quit attempts to date. It starts on the 1 October and is based on research that by the time you have quit for 28 days you are 5 times more likely to stop for good.

When Did Stoptober Start?

The first Stoptober campaign was launched in 2012 and as a result this was proved to be  great success. Social media also played a major part in making Stoptober a popular event.  Everyone has experienced a huge buzz for Stoptober including celebrities, consequently joining in to help the nation stand together during this encouraging event to help quit smoking and enjoy the benefits of doing so.

Why Does it Work?

Firstly, the idea behind Stoptober is based upon evidence showing that after twenty eight days without a cigarette, smokers are  five times more likely to give up smoking for good. Secondly, it is widely recognised that giving up tobacco smoking is an extremely difficult task for some.  However, with a tremendous wealth of support available through the scheme itself, family, friends, the NHS and other participants, as well as resources, an app, social media channels and more, it is clear to see why Stoptober is so successful.

Smoking tobacco cigarettes is harmful to your health and the health around you, not to mention the environment and your bank balance. None of these are facts that are disputed however many do still find themselves smoking regardless as they haven’t been motivated enough or felt that they had the right level of will-power to quit. Stoptober offers a wealth of support to help you achieve your goal of giving up your tobacco habit and enjoy the many health, wellbeing and financial benefits of quitting smoking.

Once you have decided to quit, it is important that you select the correct path to help stop the habit once and for all. Some smokers have the ability to stop without aid and go cold turkey, because they usually have an abundance of will power. While this might be possible for occasional smokers, heavy smokers may not find this approach successful and can even lead to withdrawal symptoms. Therefore, a slow and progressive reduction in the number of cigarettes smoked per day would be a more sensible approach.

How to Get Involved

Getting involved in Stoptober 2016 is very simple. All you need to do is sign up and await your free information and support pack to arrive. Stoptober packs are dispatched nearer the time. Although, you may get help giving up smoking throughout the year by visiting NHS Smokefree quit smoking.

For an added incentive to stay motivated and to go the full 28 days (and longer!) why not get involved in one of the many sponsorship opportunities that have arisen from the Stoptober event? Either join a local or national group or set up your own JustGiving page to collect sponsorship and donate to a charity of your choice.

Talk to a Health Professional

If you are serious about quitting smoking then talk to a health professional. Talk to your GP, or even our pharmacist because we may be able to offer you good advice and tips on the best way to stop smoking. There are plenty of options and products available to help quit smoking. We can help you make a plan to stop smoking for good. In 2015, just over a million people (1,027,000) used an e-cigarette in a quit attempt while around 700,000 used a licensed nicotine replacement product such as patches or gum. In addition, over 350,000 people used their local stop smoking service in 2015 to 2016. There are also many nicotine replacements including patches, sprays and gums that can assist in your journey to quit smoking.